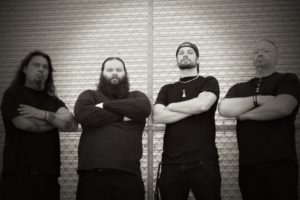 Formed February 1st, 2010… Helsott, meaning “Fatal Illness” in Old-Norse, are a Pagan Death Metal band from southern California. The band proudly pay homage to pagan cultures and ancient mythologies while keeping true to their American influences. In 2013 the band embarked on their first North American tour as part of the Paganfest festival tour line-up which included Ensiferum, Tyr, Heidevolk, and TrollfesT. In 2014 the band successfully crowd-funded their debut full length album titled “Woven” and was self released to great reviews all over the world. 2015 saw the band touring the U.S. again on a summer headlining tour in support of “Woven” and a fall tour supporting Arkona and Heidevolk. In 2016 Helsott recorded their follow up EP titled “The Healer” which was recorded in part at Trench Studios and mixed and mastered by J-F Dagenais (Kataklysm/Ex Deo). January 2017 Helsott signed to M-Theory Audio owned by former President at Century Media’s Marco Barbieri. In May of 2017 Helsott embarked on their first European tour in support of I Am Morbid featuring members of Morbid Angel, Trans-Siberian Orchestra, and Metal Church. In June 2017 Helsott toured the west coast with label mates Tennger Cavalry and Felix Martin. In August of 2018 Helsott embarked on their final and headlining tour in support of ‘The Healer’ EP alongside Label mates Sicocis and friends Malphas, and Dark Visions of Terror. On October 12th 2018, Helsott released their second full length album Slaves and Gods, via M-Theory Audio. They toured The west coast with Arkona and Korpiklaani in direct support of the release of Slaves and Gods. 2019 saw the bands return to Europe playing the Wacken Winter Nights and Cernunnos Pagan festivals. They are set to return to Europe Summer 2019 to play Wacken Open Air in Germany and in the Fall of 2019 along-side Skyforger, Finsterforst, and Enisum on the Pagan Warriors Across Europe Tour.