New video for WILL AND THE WITCH!

We were added to the Wacken Metal Battle USA: Orange County show on March 5th @ Stages in Santa Ana! Come party with us and cheer on all of the competing bands!
Tix available here: https://www.eventbrite.com/e/wacken-metal-battle-usa-2022-orange-county-tickets-217226579547

HELSOTT RETURNS TO THE STAGE!!!

BUY NOW (NOTE: Tickets purchased will be available at will call the day of the show. Just bring your photo ID.

HELSOTT REVEALS A NEWLY REMIXED & REMASTERED VERSION OF ‘WOVEN’America’s leading pagan metal group celebrates 10th anniversary with reissue of full-length debutIn celebration of the group’s 10th anniversary, M-Theory Audio is proud to reissue “Woven,” the debut full-length by America’s leading pagan metal band, Helsott. Due Nov. 13, the album – which features striking fantasy artwork by Felipe Machado Franco (#IcedEarth, #BlindGuardian) – has been newly remixed and remastered by J-F Dagenais (#Kataklysm, #MiseryIndex, #ExDeo). A limited-edition, 180-gram white wax pressing of 200 hand-numbered copies will mark the album’s first-ever vinyl release. The CD, meanwhile, will include the band’s 2012 debut EP “Fólkvangr” – which has also been remixed and remastered by Dagenais – as bonus tracks. Both formats of “Woven” are available now for pre-order at http://smarturl.com/helsott. Digital pre-orders, meanwhile, include an instant download of the song (and newly-released digital single) “Agamemnon,” a music video for which can be seen at this location: https://youtu.be/P7xnkqkBwKY Since their formation, the California-based #HELSOTT – whose name means “fatal illness” in Old Norse – has paid homage to pagan cultures and mythologies while keeping true to their American influences. The group’s unique mix of folk metal, death metal, symphonic metal, thrash, classical and rock first caught the attention of audiences on a large scale during the 2013 #Paganfest North American tour, where they performed with #Ensiferum, #Tyr and #Trollfest. That tour set the stage for the 2014 release of “Woven,” which was supported with tours alongside #Arkona and #Heidevolk.”‘Woven’ sonically reveals our lives at the time – the ups and downs, thrills and chills,” says drummer Cooper Dustman of the band’s formative work. “A dance between beauty and brutality make this a true staple to a sound that represents our journey in metal music.”While the original songs contained on “Woven” were powerful musical statements in their own rights, the newly remixed and remastered version of the record breathes new life and reinvigorated strength into the band’s already-stellar work. “‘Woven’ is a collection of songs written during a dark time in my life,” says guitarist Mark Dow. “It was, at that time, my escape from all of that nonsense. I am very happy to finally present it in the way it’s meant to be heard thanks to J-F.”Dagenais also helped provide a new sonic experience for the group’s 2012 debut EP “Fólkvangr,” available as bonus tracks on the CD reissue of “Woven.” The same songs will also be offered with the vinyl release as digital bonus tracks accessible via a download code. “It was a pleasure to re-mix and give a facelift to Helsott’s first album, ‘Woven,’” states J-F Dagenais “This record is full of heart and soul from start to finish, definitely worth checking out!” “‘Woven’ is one of my best achievements in my life,” adds vocalist Eric Dow. “With this reissue, we included our 2012 EP ‘Fólkvangr,’ which has also been remixed and mastered by J-F. Now every song in our catalog has been mixed and mastered by J-F and released by M-Theory Audio. I couldn’t be happier about that!”In the years since the original release of “Woven,” HELSOTT has released an EP (2017’s “The Healer”) and a second full-length (2018’s “Slaves and Gods”) and logged many touring miles worldwide with artists including #Korpiklaani, I Am Morbid, #Necrophagia, Tengger Cavalry, Ashes of Ares, Felix Martin, Arkona, #Skyforger and #Finsterforst. In addition, the band has performed at major European festivals such as #Wacken Open Air and #CernunnosPaganFest. The group is currently working on a new album, which they hope to release in 2021.

Helsott will be bringing the Pagan Metal to the annual celebration of the Southern California Extreme Metal Scene November 16th. 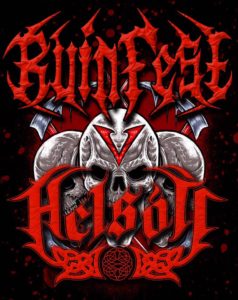 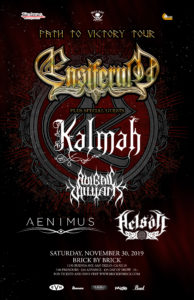 Helsott to Open For Arkona @ The Ramona Mainstage September 12th 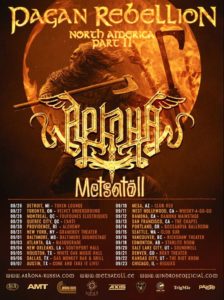